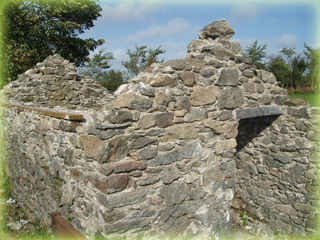 Lambing has been difficult this year, with an exceptional number of multiple births, which seem to be down to the Zwartble ram, and few natural deliveries. But the first timers have done well, and we have ended up with 35 healthy lambs. Fly strike started early, the Zwartble ram being the victim, and he took a long time to cleanse, and was touch and go for a while. The roof is nearly on the old pigsties – a renovation project which has been going on for nearly a year. Restoration using lime putty and reusing the old slates has resulted in an aesthetically delightful building, which should also be useful to store equipment and livestock. The pigsties are being built over at Ty’n y Coed, our second patch of farmland.